It’s time for another behind the scenes post! Today I’ll be sharing an annotated version of the Novel Plan I’ve used for pretty much each long-form Story since I started Entropic Horizons.

It’s cribbed together from advice from different authors (Mostly Chuck Wendig who has written extensively on writing at TerribleMinds.com). [This is also why this post is free, because I won’t take credit for other people’s work.]

I’ll attach a template of a blank plan for your use in the future, but in the meantime, I’ll walk you through a [] version of my current Novel Plan for Taking Names.

A few points before we dig into things!

For non Internet-natives, TL;DR means “Too long; didn’t read” and is basically a short summary of a very long post in a few lines.

In my case, I use the TL;DR as a way to boil down the idea I’m working on into a snappy pitch. I write down the genre and the working title. I like titles, but if it changes later on, that’s cool. This is just to make sure I don’t have NI_Untitled_01.doc through 100 in my writing folder.

This is mostly just throwing ideas down into words. It started out as just “A coming of age story that’s like John Wick but with ladies.”

Using Wendig’s ‘Cardinal Questions’, I tried to think about if other people will want to read this. Then I thought about who might not and if I would care. 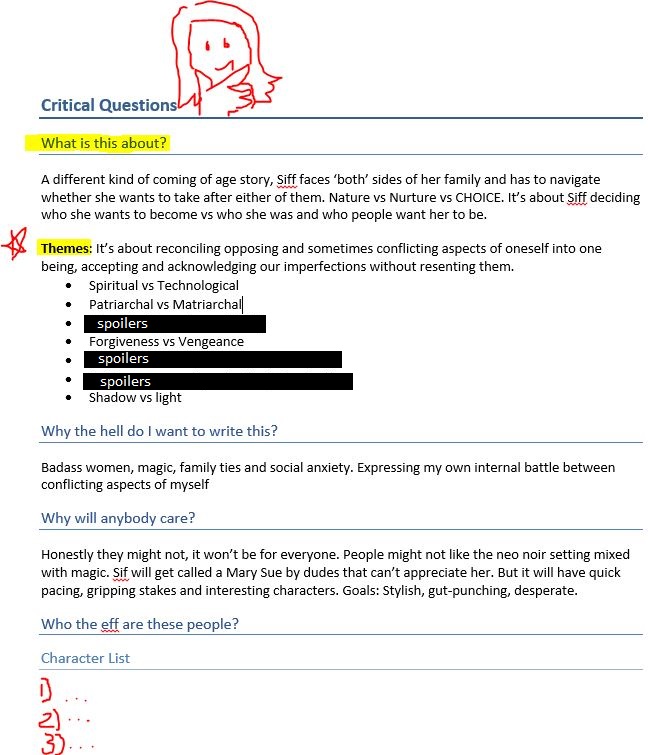 For me, the questions “What is this about” and “Who are these people” Are the most important. “Why will anyone care” is not as much a big deal since I’m not novelpublished and I need to focus on the story instead of marketing right now. (Which is tricky, I’m used to doing all at once with my other endeavours).

Above, in the Critical Questions, I list the Characters. It’s just a list of their names and a two-to-three word description of their role in life/the story.

After, I have more in-depth profiles for the main group of characters. Sif, my main character, is full of spoilers, so I replaced it with ‘stuff’  for now. Sorry! 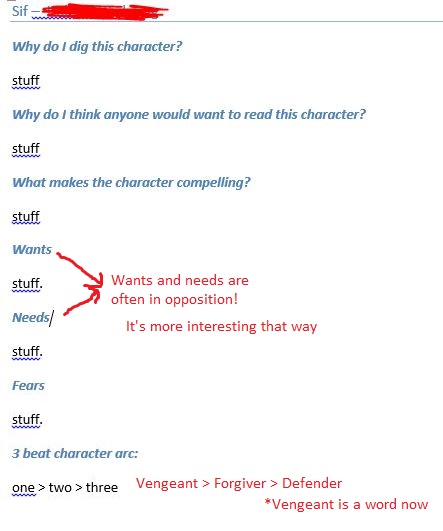 Wendig has a lot more questions about characterization, but I picked a few that I plan to focus on. In my writing I really like focusing on how Wants and Needs are different, and sometimes at odds. It’s more interesting if they’re at odds. Which will win out? WHO KNOWS?

The Three beat Arc is probably my favourite of Wendig’s Questions though. I don’t like static characters, and want to avoid writing them. Planning out the roles/approach and how those change over time helps me sort out their general path.

A sort of distillation and expansion of the TL;DR AT THE SAME TIME. Only like, separate.

I haven’t bothered with the longer pitch, that can wait until I’m done writing draft one, and have a better idea of where and how things . I mean happen. Where things happen.

I had a realization that Keanu Reeves is having far too much influence in this story already, and now need to find some way to insert an easter egg reference. Also the name “John.”

Ah yes. The Fantasy novelist’s favourite thing. Well, some of them. I’ve talked to some writers who happily tell me their world building bible is like 300 pages. But. I’m not one of those people? I have limited time and energy so bullet points and rules it is! 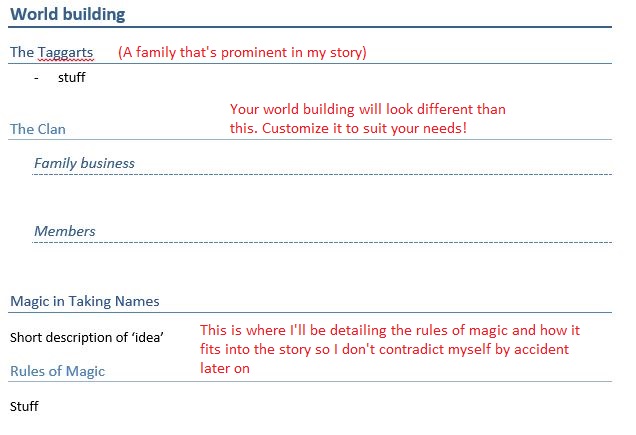 There’s a few main topics that I need to solidify in my plan before I start contradicting myself all over the place. I’ve put them down here:

Okay. This is the part that I have the most trouble with. What happens WHEN?

Again, Wendig comes to the rescue with the idea of “Alpha/Omega” of a story. What’s the Start and end? I added a middle/turning point for myself, but that happened after I had worked on the events for a while. 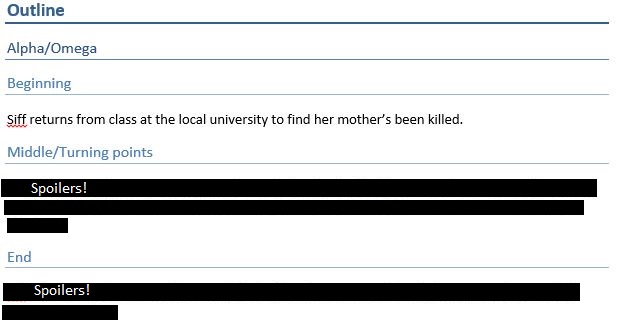 The shortest path from A to B is only optimal in math and physics. Life is made interesting by the obstacles in our way, and how we overcome them. Same with characters, so here we go. What obstacles face down your character? Unless you’re writing sword and sorcery, chances are there’s going to be a lot of non-physical obstacles. Again, the suggestions come from Wendig’s blog.

Sorry for all the spoilers. Sif faces Intellectual, Social and Moral obstacles before she even bumps up against the big bad. I kept it vague, rather than specify exact situations. The specifics will come later. (Like, right now actually)

Time isn’t Made Out of Lines

Outdated Red vs Blue quotes aside, Time doesn’t always happen in a line. If you have time travel, maybe have a few ‘timelines’. One of how the characters experience events, one of how the chronological events occur.

There’s lots of ways to produce a timeline but I like the ‘beat sheet’ method. I… like bullet points. Simple. Room for growth, and for fiddly, wiggly, messy things that people do in response to events.

After my basic timeline, I created a table to keep track of who’s doing what. The main four characters, Main events and by Chapter.

This was inspired by that semi-famous image of J.K. Rowling’s hand written graph for Order of the Phoenix.

It’s just a simplified version of my main timeline, mapping events to the stages of a hero’s journey. It’s not necessarily in order, and the Hero’s Journey doesn’t apply to a lot of my stories, but it does to this one.

Stakes: Not just for Sparkle Vampires

Decisions should matter. Choices should matter. This is something that games like the Witcher 3 have hammered into me. If you’re not familiar with the Quest about the demon-tree, go read about it. Talk about choices having consequences.

So, something has to ride on those decisions, and those are the stakes. What’s at st- yeah. That.

But, as the character changes (See 3 Beat Arc), the stakes should change too. Preferably escalate, but jumping sideways is good too.

I swear I thought I got this from Wendig but I can’t find the exact post.  ANYWAYS.

Conflicts – Similar to obstacles, but characters can have internal conflicts, which can be harder to over come than physical ones.

Complications – Life, art, and cooking should all be messy. Stories too

This is basically just a way to keep track of where I’m at when I have to go through Draft 1 (or 5) and what I’m focusing on. Otherwise I’ll forever tweak dialogue and avoid grammar forever.

Again, these are highly optional. But I’ve found something super inspiring in the past then lost it and struggled to find that image again. So now I tend to log the really impressive stuff either on a private Tumblr, pinterest or in the document.

If you aren’t familiar with Peter Mohrbacher and his Angelarium, please go drool over his weird, wonderful art.

This is probably over-planning, but I leave a lot of the sections half empty or empty until I’m actively writing the story so I can refer back to my plan as I get deep into the story.

That’s it, if you have a different process, I’d like to hear about it!