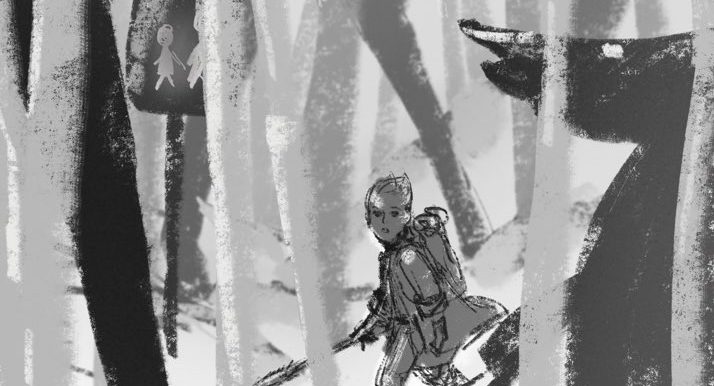 Concept art above by Picchar

KINGSWOOD is an original graphic novel about one girl’s choice to follow her father’s path, or find her own way in a world ruled by giant animals.

It’s the only way of life that fourteen year-old Tulip has ever known. In a world where massive beast-Kings rule the forests, and humans are no longer the apex predators, there’s no room for a fledgling hunter to make mistakes. After all, as Tulip’s survivalist father constantly reminds her, just a single mistake wiped out their family.

When she meets a strange old woman who talks about balance and respect instead of fear and danger, Tulip is desperate to learn more. Her father is furious when he finds out and demands she never see the old woman again, refusing to say why.

Does Tulip obey her father and give up on happiness or seek a life of exploration, but risk losing him forever?

TWO FIGURES are seen trekking through dense Temporal Rainforest. Trees are bigger than they should be, and so are some mushrooms and brush. The forest is vibrant as though it had just rained: green leaves, bright wildflowers and mushrooms, birch and brown tree trunks.